Verify that the contents of a file in a service's repo satisfy some criteria, such as containing a certain string or JSON path.

After setting up a Git Repository Integration, OpsLevel can continuously scan your code repositories and verify all of the operational best practices you’ve defined.

Along with the integration comes two checks: the Repo File Check and the Repo Search Check. This article describes the former, as well as some of the cool things you can do with it. 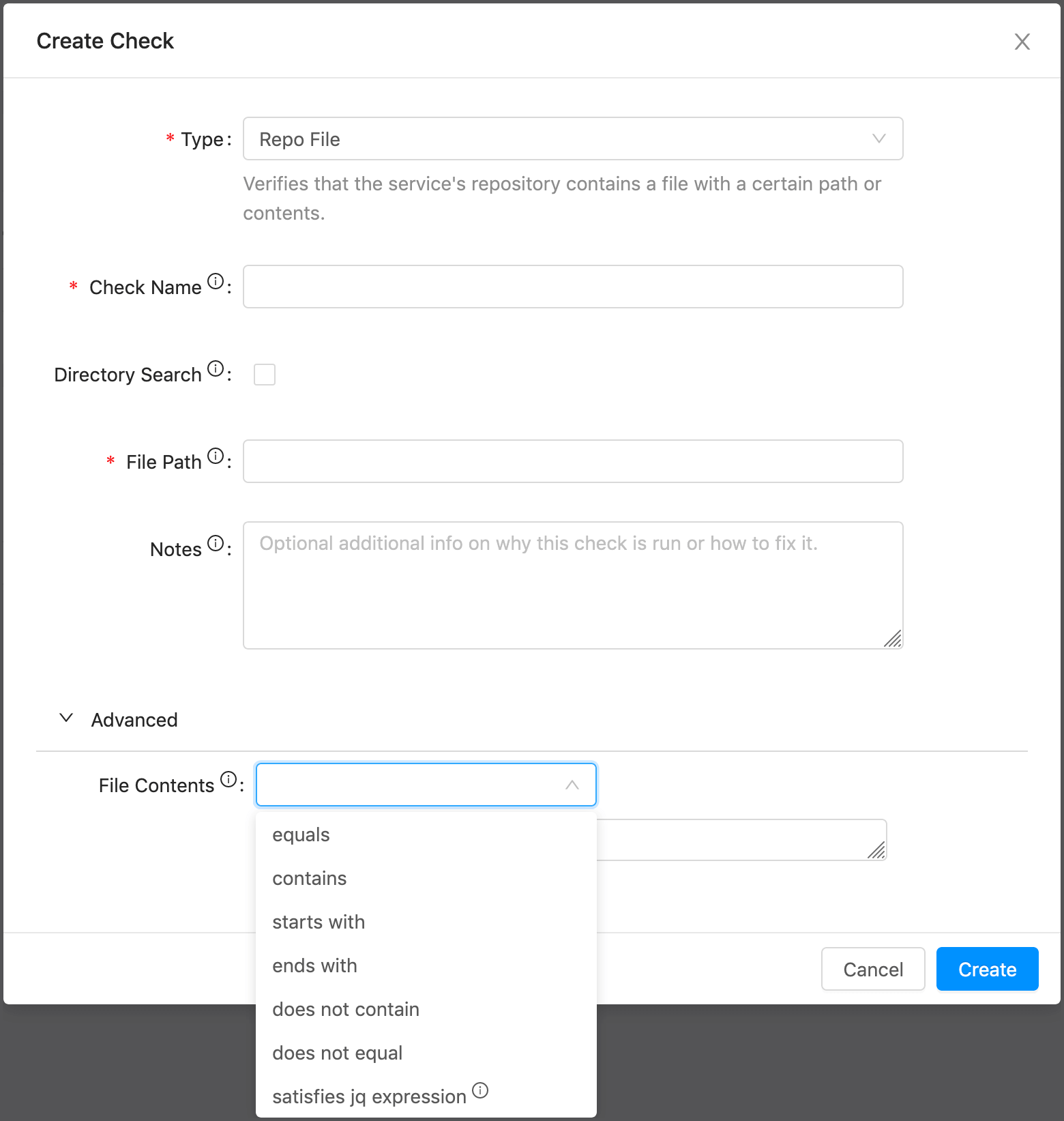 With the Repo File Check, you can verify the existence or contents of a file in your repo.

Why would you want to do that?  Well, let’s see some examples of different kinds of checks you can build:

You can verify that a repo is using a given Ruby version using either .ruby-version or Gemfile.lock. For example:

Like verifying the Ruby version, you can look at Gemfile.lock to verify a particular library is installed.

Verify Rails is not logging passwords

Part of the Rails Security Guide talks about how to set up Rails to not log passwords. You can verify that your apps have this enabled:

Much like verifying the Ruby version, if you use Pyenv, you can verify the version of Python with .python-version.

If you use Apache Ivy, you can easily validate the presence of a given Java library.

It’s good practice that every repo should have a README.  Just create a check that validates that this file exists, without looking into its contents.

If you use CircleCI, you can verify any aspect of your continuous integration. For example, you may want to verify that linting is enabled with Danger or that you’re running tests with Rspec.

Verify a recent version of Kubernetes

Older versions of Kubernetes had an apiVersion of apps/v1beta2. You can verify that your repos are all using the latest version of Kubernetes in their deployments.

With jq checks you will be able to create specific checks against the contents of JSON and YAML files in your Repositories.

Check for an odd number of replicas, greater than 2, in a kubernetes manifest file.

Check for a specific version of jenkins

The jq expression: .dependencies[] | select(.name == "jenkins" and .version == "1.3.6") will return an object if there is a dependency on Jenkins version 1.3.6. This means the file will pass the check,since an object is considered to be a truthy value.

jq checks can take a few tries before they are setup correctly. If you are trying to troubleshoot a check, it might be easier to test it locally than in the app, depending on your setup. For this, you will need to install jq, which is available on most popular package managers.

For example where {$filter_expression} is what you will be using as your check, and {$file_path} being the file in question. jq can be used like:

Alternatively there is also jq play if you don’t want to install anything locally. However be careful and redact any potentially sensitive data before pasting it into third party sites.

If your files are in YAML format, then you can use yq, a YAML wrapper around jq. Unfortunately its a bit limited, so you will need to pipe to jq to get the expression to evaluate like it will in the check:

To make this a bit easier, you can add this to wherever you keep your shell scripts:

And then you will be able to use yjq, like it were jq against YAML files on your machine.

Check if a file contains a matching semantic version.

The following check ensures that the service’s repository has a file named .node-version with a version that is at least 12.0.0. 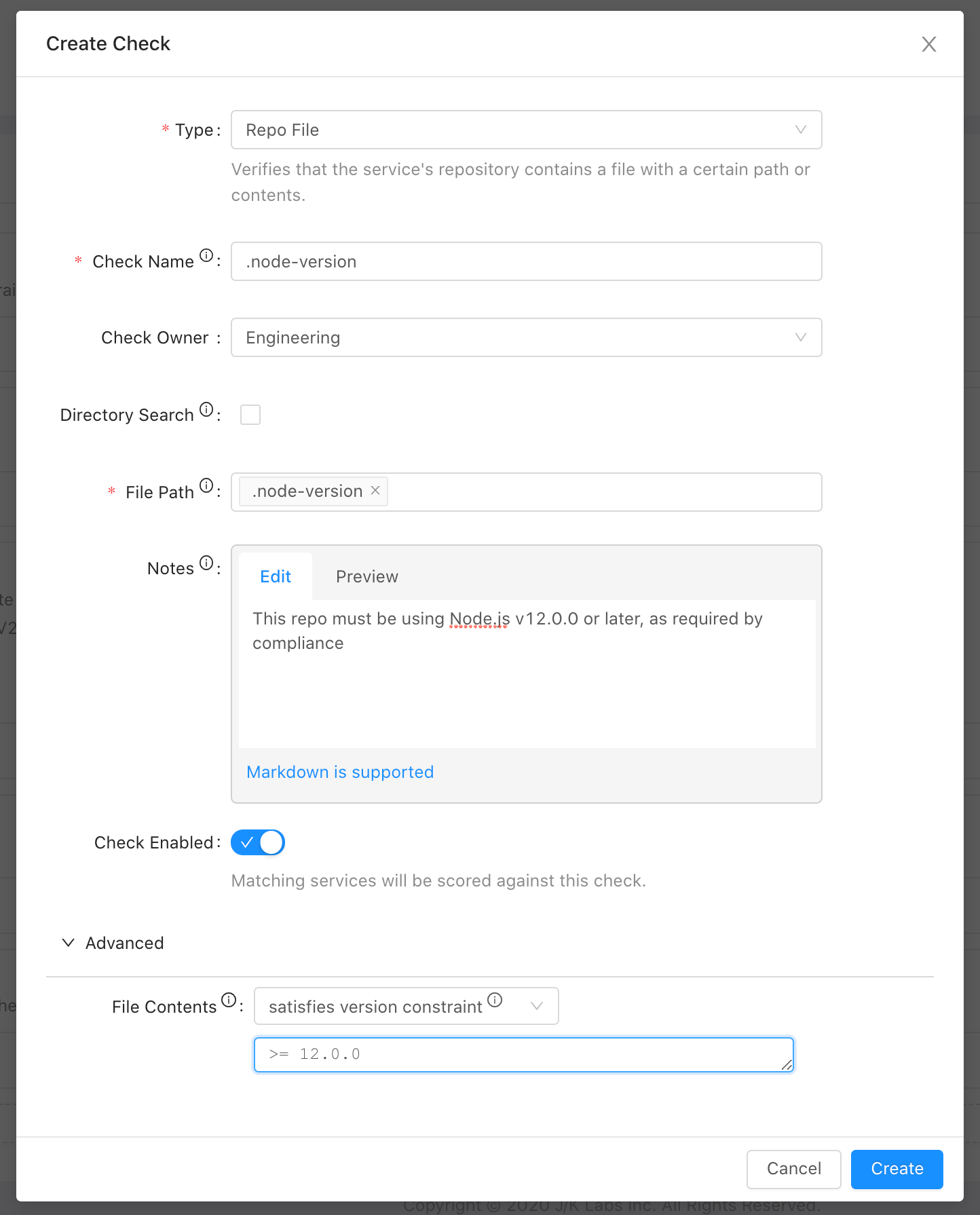 The following table defines the most common version comparators you can use in conjunction with our Repo File Checks.

See the node-semver guides for an exhaustive list of comparators you can use to build advanced version constraints.

Ok, those were just some examples to get the creative juices flowing.  But there’s tons more you can do with Repo file checks.  If you have any questions, or just come up with some interesting checks you want to share, hit us up at info@opslevel.com.